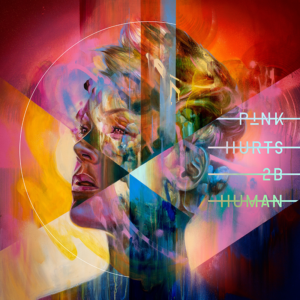 After another successful album and tour, P!nk is already back with a new album. After only 18 months since the release of her stunning album Beautiful Trauma, she took the time in between concerts to write and record 13 new songs for 2B Human, her 8th album.

Handling, as always, most of the writing duties, we find P!nk in fine form again. While touching different musical genres, as she usually does, this album is probably her most diversified yet. From the Mumford and Sons influenced first single Walk Me Home, to the more P!nk style swagger of Hustle to the club banger Can We Pretend (featuring Cash Cash),Pink can do it all. Whether it is a rocker or an emotional ballad, she always delivers. What is also impressive is the list of guest artists on this release: country superstar Chris Stapleton duets on Love Me Anyway and Khalid is featured on her latest single and title track.

And she fires on all cylinders on this album. From the 50’s influenced opener Hustle to Courage a track written by Sia (and not too far in rhythm from Sia’s own Unstoppable track) P!nk knows how to make each song her own. She also stretches her musical boundaries a little farther, this time throwing a little bit of electronic music along the way.

A force to be reckoned with, Pink has released another album where we can see her growth, both as an artist and as a writer. Once again, she pulled it off. It may hurt to be human, but it is always easier while listening to P!nk’s voice.