Jean-Pascal Leclerc Kègle (JPKegle) has never been attracted by what is traditionally taught in art schools. In high school, he preferred to fill the pages of his agenda with gloomy creatures rather than doing the work that was asked by his teachers – which obviously drew the attention of the other students! Passionate about comic books and video games, he decided to take charge of his own artistic education, first by reproducing the characters of the Marvel universe to refine his technique. Little by little, he grew to develop a more personal aesthetic, giving his own distinctive style to those otherwise common characters. Thanks to the quality and originality of these fan arts, he obtained a lot of visibility on social media, the publication of his drawings sometimes receiving up to 10 000 “Likes”.

Victim of his own success, Jean-Pascal has now abandoned the pencil for digital painting, a transition that was necessary, according to him: “The professions of illustrator, concept artist and comic book artist require to be extremely productive, fast, precise, to draw with a higher level of realism, and to have the possibility to modify or to adjust your drawings without limitations. That’s why digital painting is the medium par excellence, used everywhere around the world in businesses related to comic books, video games, cinema, board games, etc.” The online platform DigitalPainting.school has allowed him to receive that kind of training as well as to familiarise himself with his new tools: the software Photoshop CS6 and a Wacom tablet. That being said, if this transition has been easy for him, it’s only due to his level of experience in basic drawing. “Don’t be fooled”, he assures. “Digital tools are simply a way to push your work and its rendering further, but it first requires to have strong skills in traditional drawing – it’s essential. Otherwise, it’s as if someone thought that by buying an electric guitar and a big amplifier he would instantly become a virtuoso… Sadly, that’s not how it works. It’s not the tool that makes the artist.”

In this domain, there’s no doubt that his work ethic, his passion, and his perseverance have contributed to form the artist that he is today. It has also allowed him to refine his own style, which is now easy to identify with its recurring dark worlds struck by mysterious sources of light (moon, electricity, supernatural energy, etc.). This kind of composition is a way for him “to illustrate that despite the obstacles and the horrible things that tries to destroy us, there is always hope to help us go by”. Another characteristic element of his drawings is the attention he gives to the anatomy of his characters. In this field, he admits being indebted to his fifteen years of physical training and to the two years he worked has a private trainer. This other passion allowed him to observe and understand better how the human anatomy works, and then to draw the protruding musculature of his masculine, feminine – or even bestial – characters in a more realistic and convincing way.

If his fan arts helped him get renowned at first, he now prefers to concentrate on his own creations, namely creatures (monsters, dragons, androids, demons, etc.) that come from his imagination. In the last years, a great number of people who were interested in his work also hired him to translate visually their literary (the novels of Sébastien Lévesque, Alexandre Charbonneau, Camil L. Kègle and Danny Rotondo, for example) or musical (the albums of the heavy metal group Kill the Pharaoh) universes, but also to conceive the visual aspect of board games or tattoos, which allowed Jean-Pascal to cumulate contracts and finally live off his passion. In parallel, he’s also trying to finish his own comic book, a dark science fiction post apocalyptic story over two hundred pages long (to be titled Beyond the Void) that should be published in 2019.

To learn more about the work and the art of JPKegle, visit his Facebook and  Instagram pages, or look at his portfolio on DeviantArt. 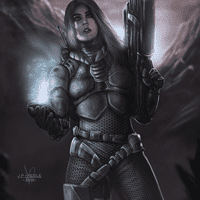 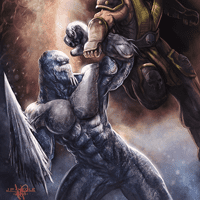 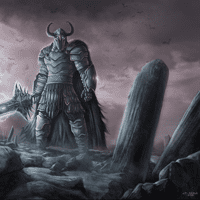 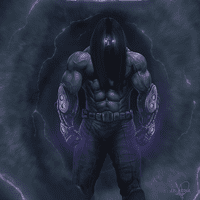